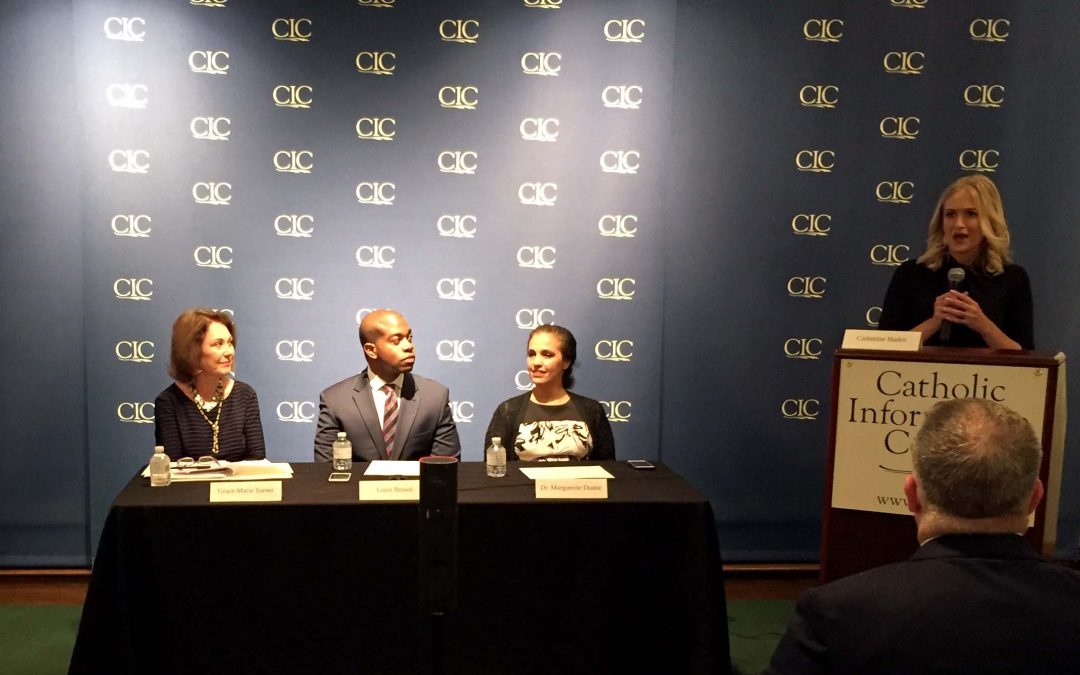 On Thursday, September 12, 2019 the Christ Medicus Foundation (CMF) led a panel discussion entitled Life, Religious Liberty and the Survival of Catholic Health Care, hosted at the Catholic Information Center in Washington, DC.  Catherine Hadro, host of EWTN’s Pro-Life Weekly, moderated the conversation between CMF Executive Director Louis Brown, Grace-Marie Turner, President of the Galen Institute, and Dr. Marguarite Duane, a Direct Primary Care physician and founder and Executive Director of FACTS. Through various exchanges, the panelists discussed the current health care landscape from their unique perspectives and experience in policy and practice and pointed out hopeful paths forward that would pave the way for a culture of life in health care.

Health Care reform is shaping up to be a key issue in the 2020 elections, and many Democratic candidates have put forth “Medicare-for-all” type proposals. How these proposals and debates shake out will have vast consequences on American life. “The outcome of the healthcare debate will determine whether we maintain our God-given human and civil rights in the United States”, said Louis Brown. Brown spoke of the impact that adopting a “Medicare-for-all” type plan would have on religious freedom and Catholic health care, saying that “authentic Catholic health care in the United States would not survive the government take-over”.

At risk are not only pro-life or freedom of conscience issues, but also patient freedom and the physician-patient relationship. “To me”, said Dr. Duane, “the doctor-patient relationship is the most intimate professional relationship a person can have…As a direct primary care physician, I work directly for my patients, I serve the individual before me”. The system as it functions today makes it difficult to serve the individual, often placing quotas, time restrictions and insurance requirements above the individual’s well-being. Government-run or single-payer health care will further strain this relationship. “I do believe there should be a single payer” said Duane, “and that single payer should be you, the patient”.  Through models of care such as Direct Primary Care (DPC), doctors are able to provide tangible healing for their patients as they are allowed to have a direct doctor-patient relationship.

While Medicare-For-All and government take-over is seen by many as a solution to the unavailability and unaffordability of healthcare, the panelists proposed a contrary solution—that reducing the role of the government and insurance companies in our healthcare decisions would be more effective and lead to better results. Quoting Paul Starr in The Social Transformation of American Medicine, Grace-Marie Turnersaid, “Political leaders since Bismarck, seeking to strengthen the state or to advance their own or their party’s interests have used insurance against the costs of sickness as a means of turning benevolence to power.” Politicians are deeply invested in being able to use the cost of health care as leverage for political power, and because of this the path to affordable Catholic health care will not be an easy road.

What Is the path forward?

While the current state of things may seem bleak, organizations such as the Christ Medicus Foundation, CMF CURO, The Galen Institute, and FACTS are a part of the effort to renew the United States health care system and to present an authentically Catholic alternative to Medicare-For-All. By offering innovative solutions to the health care marketplace that respect the individual and the physician-patient relationship, models such as Health-sharing and Direct Primary Care demonstrate a viable alternative to single-payer care. On the legislative front, the Galen Institute has put forth the Health Care Choices Proposalwhich devolves power to individuals and presents a comprehensive solution to astronomical health care costs. “The beauty of this is that it’s not over”, said Louis Brown. “We can do a lot. But we just have to have a sober reality—it is your problem, it is my problem”. Medicare-for-all, loss of patient choice, and lack of religious freedom are not an inevitable reality. Building an alternative future, however, will require innovative, creative, and dedicated work of each and every individual.