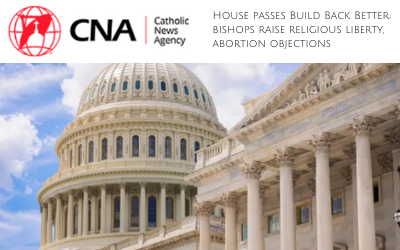 “Congress should seek changes in the social safety net without harming life and without undermining the ability of religious institutions to participate in the human service needs of our nation,” Brown said.

The U.S. House of Representatives narrowly passed the Build Back Better Act on Nov. 19, voting 220-213 to approve nearly $2 trillion in domestic spending for a host of ambitious new social programs, including universal pre-kindergarten, increased child care subsidies, and initiatives aimed at shifting the country away from fossil fuels.

The morning vote was almost entirely along party lines. Rep. Jared Golden (D-ME) was the lone Democrat to break with his party and vote “no” on the bill. The legislation still needs to be passed in the U.S. Senate.

In a statement released by the White House, President Joe Biden (D) hailed the bill as transformative legislation that would “create jobs, reduce costs, make our country more competitive, and give working people and the middle class a fighting chance.”

Further, Biden said the bill would get “Americans back to work by providing child care and care for seniors,” and would cut taxes on the middle class.

The bill, along with the infrastructure law, is “the most significant investment in our fight against the climate crisis,” Biden added.

Earlier this week, on Nov. 15, Biden a signed a more than $1 trillion bipartisan infrastructure plan into law. Approximately half of that new funding is earmarked for transportation, broadband Internet, and utility upgrades.

Getting the Build Back Better Act through Congress has been a far more difficult challenge for his administration, however. Catholic and pro-life organizations have warned that the contents of the bill could undermine protections for religious freedom and the unborn.

“[House Speaker Nancy] Pelosi and her allies are sneakily working to force Americans to be complicit in abortion on demand up to birth every which way they can,” Susan B. Anthony List President Marjorie Dannenfelser said in a statement following the passage of the bill.

“Today [Pelosi] even touted the fact that the popular bipartisan Hyde and Helms amendments, which stop taxpayer funding of abortion both at home and overseas, are simply ‘not in the bill,’” she said.

The Hyde and Helms amendments restrict the use of taxpayer funds for elective abortions in the U.S. and abroad, respectively. They have been included as riders in budgetary bills since the 1970s.

Prior to Friday’s vote, in a Nov. 3 letter to members of Congress, six bishop chairmen of the United States Conference of Catholic Bishops (USCCB) expressed support for the legislation’s broad goal of fostering the “common good,” especially those elements of the bill that seek to “support the poor and vulnerable and strengthen the social safety net.”

Specifically, the bishops pointed to “an extension to the recent expansion of the Earned Income Tax Credit; provisions to support families such as a permanent refundable Child Tax Credit, childcare resources, in-home care for family members, and a strengthening of child nutrition programs; an expansion of SSI to residents of U.S. territories; affordable housing provisions; and important environmental provisions, especially climate and energy programs critical to achieving emissions reductions targets.”

At the same time, the bishops’ letter expressed grave concerns about other key provisions of the Build Back Better Act.

“Specifically, while expanded access to early child care and pre-k would be beneficial for many working families, we are concerned that the current provisions to do so — in a departure from the approach in existing federal programs — explicitly make providers recipients of federal financial assistance and attach new and troubling compliance obligations,” the letter said.

“This will effectively exclude many faith-based providers from participation (or in some already existing state-based programs, continued participation), thereby severely limiting options for families, and suppressing a mixed delivery system,” the letter stated.

The letter also called the provisions for direct government funding of abortion in the bill “completely unacceptable,” and urged Congress to restore those long standing restrictions.

“We have been consistent in our position and reiterate that it would be a calamity if the important and life-affirming provisions in this bill were accompanied by provisions facilitating and funding the destruction of unborn human life,” the bishops’ letter stated.

“No proposal to support individuals needing affordable health care coverage should compel Americans to pay for the destruction of human life through their tax dollars.”

In an interview with EWTN’s Raymond Arroyo Thursday, pro-life leader U.S. Rep. Chris Smith (R-NJ), who voted against the bill, called it “the most pro-abortion piece of legislation that I’ve seen in years.”

Smith drew fire from his party and former president Donald Trump for being one of 13 House Republicans to vote for the infrastructure bill on Nov. 6.

In a statement Louis Brown, executive director of the Christ Medicus Foundation, a Catholic health care and religious freedom advocacy organization, echoed the bishops’ objections to the restrictions on religious child care providers, and said the bill’s failure to include the Hyde Amendment “gravely harms babies in the womb.”

“Congress should seek changes in the social safety net without harming life and without undermining the ability of religious institutions to participate in the human service needs of our nation,” Brown said.

The bill now goes to the Senate, which is evenly split 50-50 between Democrats and Republicans. In a late September interview with National Review, Sen. Joe Manchin (D-WV), a moderate Democrat, predicted the bill would be “dead on arrival” if the Hyde Amendment was not included.